Holo Price Prediction: The future of HOT Coin & Holochain in 2022

It is not easy to make a prediction on the future price of the HOT coin because it depends on many factors still unknown. However we are sure that currently the price is very low and it would be a shame to miss this opportunity. Project founder Arthur Brock made a Holo coin price prediction on the Reddit social network and talked about a future price of $1 for each Holo coin in the next few years as well as price stabilization in that area. This could happen in 2022, 2025 or 2030 nobody can know exactly the timeline. Indeed, the HOT token is a placeholder for the future HoloFuel cryptocurrency. It was designed to become a long-term stable coin and currently the token is in the process of speculative price discovery in this direction. This trend should remain strong as long as the project has not yet become mainstream and known to everyone. By browsing the documentation we can find the modeling of the relationship between the price of HoloFuel and the internal price which explains that the three prices: the hosting price, the internal price and the price of HoloFuel are closely related. As explained earlier we can see that the price of HoloFuel has a tendency towards stabilization. Finally, this graph 1 looks a lot like the trend that Bitcoin has taken over the last 10 years visible in graph 2. That is to say a succession of parabolic rise during price discoveries then a stabilization of the price with less and less strong movements and longer and longer. Indeed, in the event of massive adoption of crypto-currencies, Bitcoin could also become a stable coin in the long term. However, the design of HoloFuel should allow it to be quickly more stable and thus avoid the usual 60% declines in Bitcoin during bear market phases. However, be careful not to confuse HoloFuel (HF) with the stable coins tethered to the price of the US dollar, such as USDT, USDC or BUSD tokens. Indeed HoloFuel will not be attached to the price of the US dollar, it can reach $ 1 but go even higher towards $ 2 or more! However, volatility will decrease more and more as it rises, which is why it is important to be an early adopter in order to benefit as much as possible from the rise in price.

Chart 1: Interaction between the price of HoloFuel and the internal price 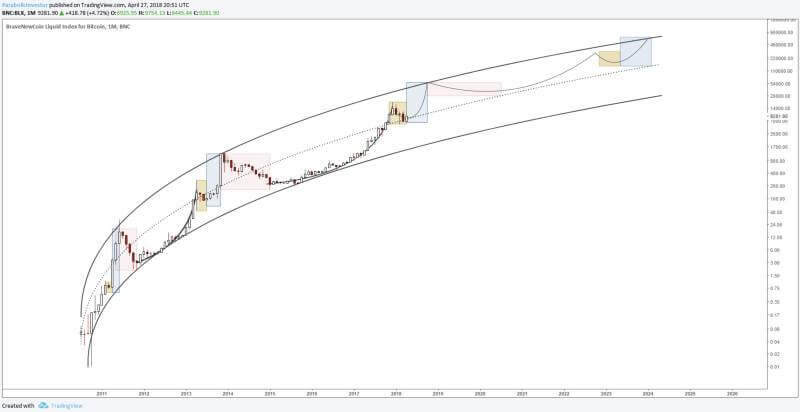 In February 2021 we had a memorable event in the world of cryptocurrencies, indeed on February 8 2021 Elon Musk the CEO of Tesla publicly announced that his company had invested $ 1.5 billion in Bitcoin which represents 8% of the assets of the society at the time of the transaction. It was also on that day that later in the evening cryptoassets called ulta low sats * exploded in minutes and performed by a hundred percent. Holo (HOT) is one of these ultra low sats, we can also mention Bittorent (BTT), Wink (WIN) and Dent (DENT). Coming back to Holo (HOT), this Monday, February 8 2021, it brokes this big price resistance at the level of 0.001 USD (yes a tenth of a US dollar cent). This resistance is also a very important psychological threshold for traders and investors.

ultra low sats * = a very affordable crypto asset class, indeed with around 1000 $ it is possible to acquire 1 million units of these cryptocurrencies

Between February 8 and April 5, 2021, the Holo (HOT) coin made its first big impulse wave after breaking that $0.001 and then retracing it properly. It took 12 months to complete this cycle and stabilize in order to prepare for a next wave of impulse which has just started exactly 1 year after the previous wave, that is to say on February 8, 2022.

As we can see from the weekly logarithmic chart (Weekly) below of HOLO/USD (HOT/USDT) on the Binance exchange. You can see this blue line at $0.001 which served as the first psychological level as well as a pivot between buyers (bull) and sellers (bear). The next psychological level that serves as horizontal resistance is now the red line laid at $0.017, we are aiming for a return to this price and a quick stabilization before a strong breakout for a next big impulse. 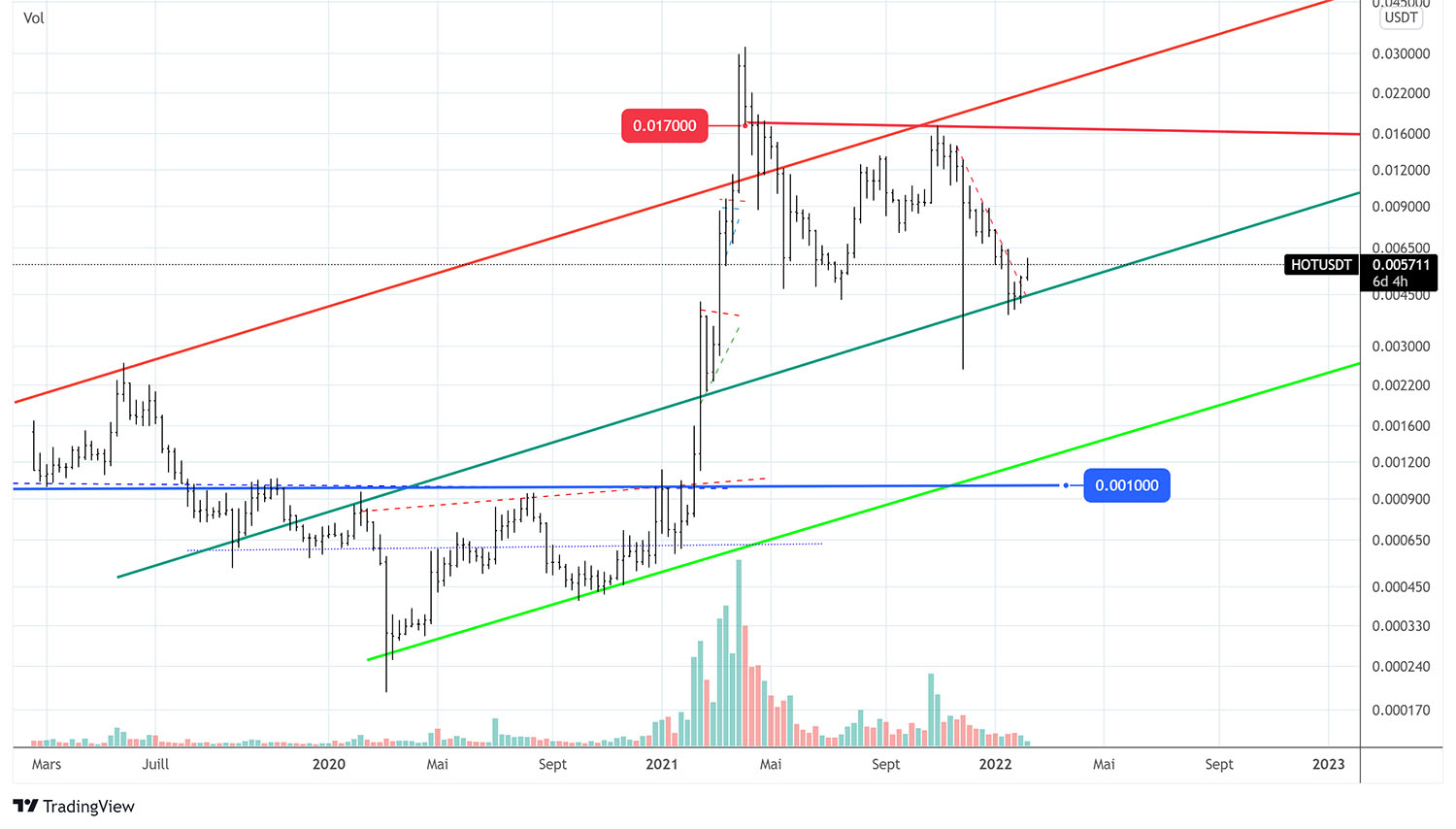 By looking at the chart of Holo against other pairs of cryptocurrencies such as HOLO/ETHEREUM (HOT/ETH) or even HOLO/BNB (HOT/BNB) we can notice a huge upside potential against these cryptocurrencies. For Holo to succeed in outperforming against these strong currencies Ethereum and Binance Coin, we can count on major events for the project during this bullmarket of 2022. We have listed these events:

If we accept the fact that we are in a big bull market, these crypto-currencies will also rise in 2022 against fiat currencies (dollar, euro ...) which gives us a potential price of HOLO/USD (HOT/USDT) between 5 and 50 cents for the peak of the cryptocurrency market in 2022.

The years after this bull market of 2022 may then be dangerous for many crypto projects. Indeed, the vast majority of these projects are driven by marketing and scarcity, which means that even with very few users, promotion on social networks by influencers drives up the price. But beware, the price rises so quickly that at a certain point there will be no more buyers and a wind of panic risks frightening and causing the departure of many novice investors as in 2018. Fortunately the Holo project will be become HoloFuel will finally be recognized and mature. Its mechanism for regulating the quantity of token in circulation will stabilize the price according to supply and demand. We still expect the price to drop between 2022 and 2023 but less than the majority of other cryptocurrencies. Then 2024 and 2025 the price may start again in a strong trend just like Bitcoin and the few other surviving cryptocurrencies.

* Disclaimer: Our predictions are made based on many factors from the past such as historical data, social data, technical progress. We are not responsible for any profit / loss. Learn more.

What is the difference between Holochain and Holo?

Holochain is a software, it is the framework developed by the team that allows you to build scalable distributed applications while ensuring data integrity. Holo is a distributed hosting network that allows developers of Holochain applications to host their applications in order to make them available to the whole world via the current internet (the world wide web)

What is the Holo token used for?

The Holo token, also called HOT or Holo coin, is a placeholder for the future HoloFuel cryptocurrency of the Holo hosting network. Indeed, during the transition to the Mainnet network, each Holo token can be converted against a HoloFuel at a ratio of 1 to 1.

HoloFuel is the native currency of the decentralized application hosting network built on the Holochain framework. It’s itself a decentralized Holochain application called HoloFuel Wallet. The system is designed on a mutual credit principle to allow hosting providers to resell their services and businesses to pay the cost of hosting.

Not at all, on the contrary the project is still in its infancy, since in February 2022 it is still in the alpha phase and thousands of people have already been able to test these Holo applications directly in the web browser. The project is therefore alive and still in its early stages, very promising for the future.

Is Holo coin a good investment?

The first investors to participate in the ICO generated a considerable profit within a few months. The 2018 bear market and development delays then considerably slowed down the ROI but in the future with the great trend of digital currencies this investment should continue to be profitable and lucrative.

The technology developed is the most innovative and radical approach to the cryptocurrency market. In the very long term, when the technology has proven itself, the price may reach $ 1 and even go higher but you will have to be patient, this could take between 5 and 10 years. Others analysts such as TradingBeasts, Ripplecoinnews, DigitalCoinPrice are also very bullish on the Holo price. For instance right now DigitalCoin talks about a price between reaching 2.9 cents in 2021 and 9 cents in 2028. We think it can be much more faster to reach 10 cents if Holo can break the latest resitance against BTC and ETH. Indeed with obtaining the U.S. patent the Holo project has won the confidence of investors and indeed Holo is now about to become mainstream and to gain the attention of the biggest players for example see the article of Nasdaq and Capital which should help to continue this powerful rise in the coming months.

Based on our analysis above we believe that Holo could reach between $2 and $5 in 2030.

Can Holochain be mined?

The money creation system is quite different with Holo, but it still has similarities with blockchain. Indeed, it is the application hosts who will generate HoloFuel against the provision of their computing power.

Is Holochain an open source protocol?

How good is the Holochain team?

The Holo project has a high quality team, the founders have decades of experience in software development but also in designing alternative currency. The developer team is decentralized all over the world and is passionate and totally dedicated to the success of the project. In addition, an independent developer community brings strong added value to the ecosystem.

Buy HOT coins for the future

Buying HoloFuel coins today is a unique opportunity to join the ship as an early investor and enjoy the next trend until the mass adoption! If you are wondering how and where to buy Holo you will discover here our best tips!